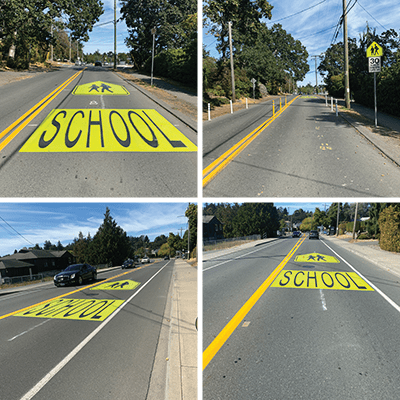 “During our Safe Routes to School consultation with Marigold School staff and parents, concerns were brought up regarding excessive speeding in the school zones as well as erratic and dangerous driver behaviour in the school crossings.

The Marigold/Spectrum/St.Joseph school zone makes up the longest school zone on the Island! The length of zone combined with the nature of the road has led to a pattern of non-compliance with the 30km/hr speed limit.

“Over the last six years we worked with the Capital Regional District and 25 participating schools to develop Active and Safe Routes to School plans,” said Mayor Fred Haynes. Read Mayor Haynes’ opinion-editorial in the Saanich News for more about safe routes and active transportation.

To address these concerns, we have installed a combination of school zone signs, road markings, and delineators across the length of the zone. We will also be adding speed reader boards in the coming weeks. These additional traffic control devices will serve as periodic reminders to slow down and continue to watch for children. In some locations, the delineators will also serve as physical barriers to prohibit vehicles from entering the crosswalks.

Additionally, we have reviewed all existing street signs in the zone and have removed, relocated or simplified the signs in an effort to decrease sign clutter. Together, these improvements will serve to slow drivers, increase awareness of the three consecutive school zones and improve safety for active transportation users.

We have recorded some short before and after videos of the area. Have a look at these and see just how much has been changed!

Images of the improvements

New Pencil Crosswalk In Abbotsford, BC